I will tell shortly what Raspberry Pi is, then we will learn how to install Raspbian Operating System and connect to Raspberry Pi via ethernet cable to control it in this article. I will show how to do on my installed Xubuntu which is a Linux distribution like Raspbian instead of Windows Operating System. The steps below are same if you have a debian-based distribution.

Before sharing information about Raspberry Pi, it goes without saying that Raspberry Pi is not a printed-circuit card and it is a computer credit card size.  I have briefly summarized by saying it is a computer. Of course you can not play football game. However you can connect TV via HDMI cable and take an image, use a keyboard and wirte text. You can do minor works, play some games, run office programs, create some projects using software such as Python etc. with Raspberry Pi which we call a small computer like you do on your computers. The software which we will use on Raspbian distribution is Python. You can also use C, C++, Java and others.

After we briefly learned what Raspberry Pi is, it is time to install operating system. Download here Raspbian ISO file. 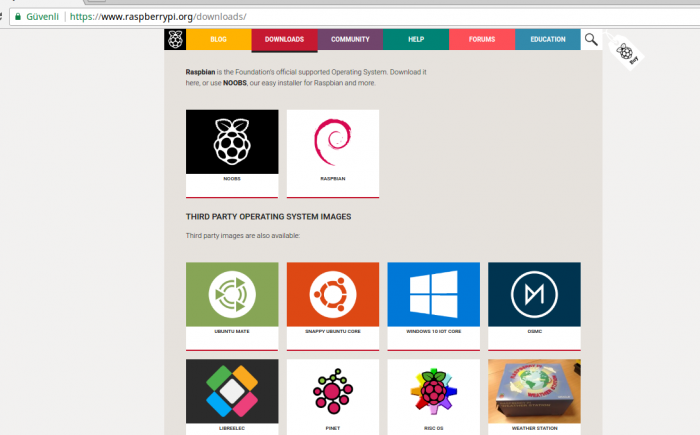 We will need to burn the downloaded file to SD card, at least 4 GB recommended, however it’s better to have more capacity. You can burn to SD card by downloading Etcher program.

Once we have finished burning to the SD card, let’s explain how to connect via the Ethernet cable. We need to know the IP address of Raspberry Pi for this. There are a lot of ways to learn IP adress. We will connect the Raspberry Pi to modem via the ethernet cable. You can see the local IP address by writing ifconfig command on the terminal. In general, you can type on your browser 192.168.1.1 and enter the modem interface. Username: admin Password: superonline (whichever name your internet provider is) We won’t constantly repeat the steps to connect. We will assign Static IP in the next posts and connect faster.

So far we installed operating system, learnt Raspberry Pi was and IP adrress via Ethernet cable. In the next post, we will connect with SSH, mention about installing VNC Server, and connect to the screen of Raspberry PI.